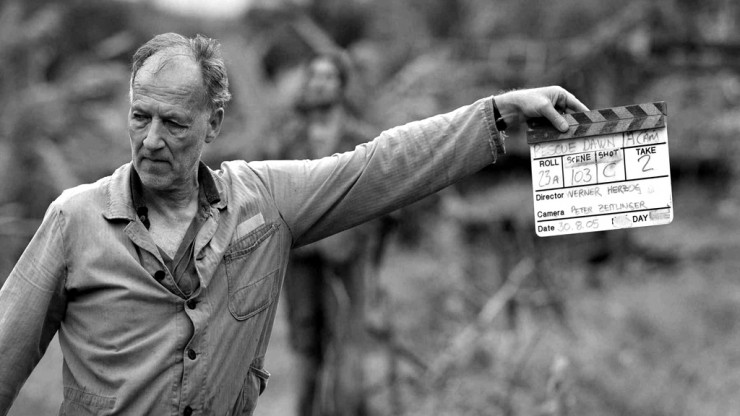 The best advice I can offer to those heading into the world of film is not to wait for the system to finance your projects and for others to decide your fate. If you can’t afford to make a million-dollar film, raise $10,000 and produce it yourself. That’s all you need to make a feature film these days. Beware of useless, bottom-rung secretarial jobs in film-production companies. Instead, so long as you are able-bodied, head out to where the real world is. Roll up your sleeves and work as a bouncer in a sex club or a warden in a lunatic asylum or a machine operator in a slaughterhouse. Drive a taxi for six months and you’ll have enough money to make a film. Walk on foot, learn languages and a craft or trade that has nothing to do with cinema. Filmmaking — like great literature — must have experience of life at its foundation. Read Conrad or Hemingway and you can tell how much real life is in those books. A lot of what you see in my films isn’t invention; it’s very much life itself, my own life. If you have an image in your head, hold on to it because — as remote as it might seem — at some point you might be able to use it in a film. I have always sought to transform my own experiences and fantasies into cinema.

A natural component of filmmaking is the struggle to find money. It has been an uphill battle my entire working life… If you want to make a film, go make it. I can’t tell you the number of times I have started shooting a film knowing I didn’t have the money to finish it. I meet people everywhere who complain about money; it’s the ingrained nature of too many filmmakers. But it should be clear to everyone that money has always had certain explicit qualities: it’s stupid and cowardly, slow and unimaginative. The circumstances of funding never just appear; you have to create them yourself, then manipulate them for your own ends. This is the very nature and daily toil of filmmaking. If your project has real substance, ultimately the money will follow you like a common cur in the street with its tail between its legs. There is a German proverb: “Der Teufel scheisst immer auf den grössten Haufen” [“The Devil always shits on the biggest heap”]. So start heaping and have faith. Every time you make a film you should be prepared to descend into Hell and wrestle it from the claws of the Devil himself. Prepare yourself: there is never a day without a sucker punch. At the same time, be pragmatic and learn how to develop an understanding of when to abandon an idea. Follow your dreams no matter what, but reconsider if they can’t be realized in certain situations. A project can become a cul-de-sac and your life might slip through your fingers in pursuit of something that can never be realized. Know when to walk away.

Perseverance has kept me going over the years. Things rarely happen overnight. Filmmakers should be prepared for many years of hard work. The sheer toil can be healthy and exhilarating.

Although for many years I lived hand to mouth — sometimes in semi-poverty — I have lived like a rich man ever since I started making films. Throughout my life I have been able to do what I truly love, which is more valuable than any cash you could throw at me. At a time when friends were establishing themselves by getting university degrees, going into business, building careers and buying houses, I was making films, investing everything back into my work. Money lost, film gained.

Even if I went broke, I wouldn’t be able to sell anything to the highest bidder. What makes me rich is that I am welcomed almost everywhere. I can show up with my films and am offered hospitality, something you could never achieve with money alone… For years I have struggled harder than you can imagine for true liberty, and today am privileged in the way the boss of a huge corporation never will be.

*I got forwarded this from a listserv I’m on.  Poster didn’t document website otherwise would definitely credit.