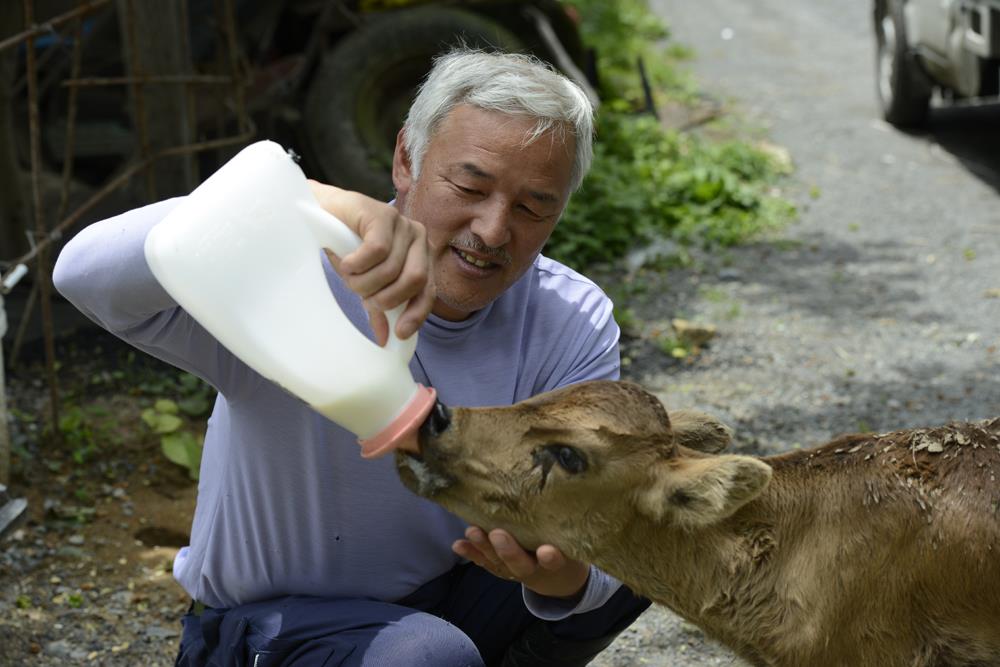 While trending topics focuses on finger-pointing and disseminating politically-correct/wrong answers by leaders handling the Cluster-Fuck known as Fukushima, no one has really even given much thought to lives without a politically/corporately-represented voice.

His name is Naoto Matsumura.  If there’s any reason in the world for humans to understand the wrongness of pop-culture driven YOUTH obsession; need to look no further than rice-farmer Naoto.

In the wake of the Fukushima nuclear reactor melt down, with humans safely evacuated, animals (which humans put into the possible realm of nuclear radioactive danger) were abandoned to fend for themselves.  Presumably the fuzzy logic is these animals will die peacefully from radioactive contamination.  But no one apparently even considered death by dehydration or starvation.  Except Naoto.

He also fled at first, but returned to care of his condemned animal-friends inside the restricted 12.5-mile radioactive zone, initially.  Quickly, all the animals, trained to be human-dependent took to seeking his help.  His decision apparently was swift.  With a sense of humor, the 55 year old answers “They told me I wouldn’t get sick for 30 or 40 years.  I’ll most likely be dead by then”.

Government has forbidden Matsumura from living in the exclusion zone; in perhaps the most humanitarian way ever, Rebel WITH A Cause, Naoto defies authorities to live as the sole caretaker of our four-legged friends.  How punk-rock is this guy?!?

The only precaution he takes is to only eat foods imported into the zone.  Made possible by donations from around the world.

From Naoto’s Facebook page, he doesn’t pose his giving up of being a functioning cog in society as much of a sacrifice, but rather promotes love and sharing of this planet with our fellow sentient lives.  Why doesn’t any clergy, preachers, imams, monks, politicians and anyone in the business of preaching/leading betterment of us do as they preach and support Naoto?

Matsumura does have a son of his own as well as a wife, Macchan.  They met during an anti-nuclear tour of Japan and Europe.  They do not know when, if ever, they will be able to live together as a family.

A true Rōnin, who exemplifies the real Bushido way of life.  Please make a donation to Naoto.

If you have trouble figuring where to send the donation, as we did, since Naoto’s sites are mostly in Japanese, please contact us as we are getting in touch with Naruto’s camp and making arrangements.  Thank you.