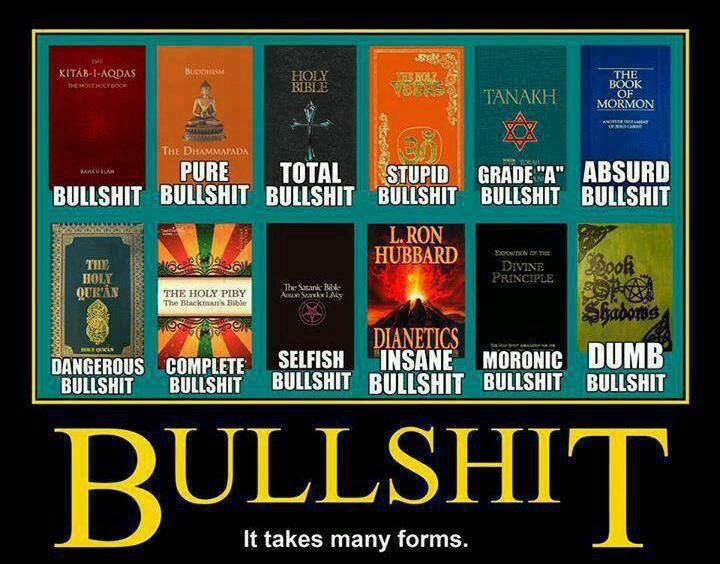 Christianity has heaven to look forward to.  And for some, returning on a chariot of fire lead by a nude dead dude.

As for the other Bronze-Age compliance schemes that has been retranslated over time:

Hinduism – According to the Markandeya Purana, the world will be ended by the Pralay (literally, “destruction”), an all-destroying flood. Small wonder the religion prizes not only piety, but absorbency.
Islam – A grand judgment for all, during which believers are distinguished from infidels by producing more sweat, but are eventually given a sweet drink that abolishes thirst eternally. Hard to believe they came up with this in the desert.
Hopi – This Native American nation believes the land will be covered in iron snakes, stone rivers, and a giant spider’s web; the seas will turn black, and a huge blue star will crash into the Earth. This is believed to be the only eschatology invented by a nine-year-old boy.
Buddhism – Buddha’s teachings will disappear from the Earth, only to be reinstated by a new Buddha. Unsurprisingly, the “mellowest” of the end-time scenarios.
Mormonism – Jesus Christ will return to Earth at Jackson County, Missouri, and humans will be assigned to one of three heavenly kingdoms. Though why anyone would want to live there after having experienced the Show-Me State is unfathomable.
Norse Mythology – A cataclysmic, all-destroying battle between the gods, known as Ragnarok–whose name shall inspire countless garage bands and teenage boy locker inscriptions.
Mayan – The famously sophisticated Mayan calendar predicted a “great change” would occur in our year 2012, which some interpret as a reference to the end. Isn’t it funny how you can be really good at predicting someone else’s civilization, but…
Zoroastrianism – The Earth will be devoured by fire, after which sinners will be punished for three days, then forgiven. Come on, 72 hours? We’ve had hangovers that lasted longer.

Vitamin/Supplement industry, pharmaceutical industry and organ transplant industry, are products and services that extends ones’ time here on earth.  So if indeed the majority of the human populous did believe in the afterlife, heaven is a perfect place to be, apocalypse will inevitably happen during this lifetime, coming back to experience life again; why are the aforementioned industries sales booming?

As warm and fuzzy as the anticipation of any inevitable good experience is; like drinking a cold glass of liquid when you are parched, the actual action is that much more fulfilling than the wait.  …So what’s with the waiting?  And cheating heaven with a potential suffering through destruction of our planet isn’t really a good demonstration of faith is it?  Believers, believe in your abnegation of reality and self-aggrandizement, and reject anything that has to do with making your time here on earth better or longer.

Instead of prototyping a world of reason and rationale, the need for control by Big Brother has society turning to parallel minds that result in more sameness.  Obedience and self-subjugation to an invisible governance.

If indeed “religious” is used as a descriptive of the world, a hypocritical world is more fitting a description.