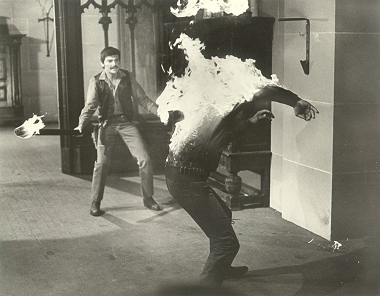 How these two became separated is beyond comprehension.  Filmmaking IS Technology, Technology enables Filmmakers to make films.  What’s with the distinction?  ….Unless it’s the frustrations of Next-Generation showing.

I understand Chad’s insistence at traditional fire burns for film, it’s what he know how to do, it’s what has proven to work and he gets paid for it.  Chad most likely feels he’s past the age of learning anything new, especially with them fancy-smancy computers.  However refusing to recognize reality after all facts are presented is kind of… an illness.  Fire is dangerous and expensive, especially on large scale.  But more so what makes me not care for the Chads is the detrimental effect he has on progression.  This guy is willing to keep people from advancing due his own fear and ego of being left behind and losing his bullheaded investments that he’s willing to drag anyone that’s within ear shot down to his level.  Repeating the same old, over and over, getting the same old results.  And I’m more inclined to not have any sympathy for Chad due him being 32 at time of our discourse.

Obviously from today’s motion pictures, we can see that not only does digital fire look good, it’s better than traditional fire burns, safer, and creates many more jobs.  Not just in art, but the development of computing hardware and software scripting.  Sadly though, the Chads of the world are ever still present, despite them very selves indulging in the perks of technological advancements in every part of their lives.  It is not a question of age, but rather thinking.  Some say welcome to the Bell-Curve, I say welcome to indoctrination.